When work is distributed, the office no longer carries the burden of being a platform for presenteeism. Its the hub for collective energy that spills out into new digital toeholds across the city. Sue Wittenoom tracked the rise interactive urban gaming for Green Cities in Melbourne in 2015 and won the audience vote for best 8X8 presentation. PVI collective continues to orchestrate city-based incursions. In October 2020 they hosted tiny revolutions as part of The Performance Space’s LIVEWORKS Festival of Experimental Art. 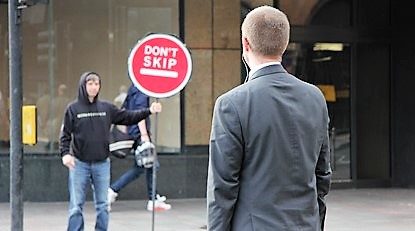 Why would Deloitte’s Silicon Valley think-tank be studying online gamers and kite surfers? John Hagel and John Seely Brown’s hypothesis is that engaged employees will not be enough to sustain performance in uncertain times where the half-life of a business model is constantly contracting. They argue that to thrive in the twenty-first-century world, a particular kind of “scalable learning” is needed: learning driven by passionate people who are committed and connected to their industry, and who actively seek out challenges to rapidly improve their performance.

These people thrive on challenges and draw energy from environments that allow them to learn. The early cohorts of digital natives are now graduating from schools where personalised learning has been integrated into the curriculum. They expect to be an active participant, not a passive observer.

The transformation in our schools is being played out in our workplaces. Technology is shifting both the means of work and the relationships that manage it. Knowledge-based processes are increasingly automated or outsourced. Hierarchies are being routed by networks.

According to a 2013 paper by Carl Frey and Michael Osborne, two Oxford University researchers, 47% of all jobs are likely to be replaced by a computer – not just factory work – but any process governed by an algorithm of rules where best practices can be identified.

What’s left for us humans is arguably the more interesting stuff that relies on higher order thinking, collaboration, innovation and relationships. These are the qualities that people bring that robots aren’t so good at – interactivity, emotional intelligence, flexibility, quirkiness.

They are all qualities found in the growing companies that we most admire.

In Australia, the poster child for such progressive, human-led but technology-enabled companies is software development company Atlassian – a company that is on the verge of an IPO that would see the two 34 year old co-CEOs valued at over A$1b each. The success of this company is founded on a set of values targeted squarely at the new world of work:

The changes in the physical workplace are well underway. Andrew Laing’s 2013 paper on the ITC sector in New York sets out a comprehensive survey of the shifts both in demand and supply for workspace.  The conventions of the relentlessly efficient single use office tower, the long commercial lease, the privately owned work point are all crumbling. Many of our clients are already using less space and looking for new ways to share the space they have. Work is leaving the building, and looking for a new toeholds across the city – the new hubs and third places, and the old libraries, cafes and public spaces.

The spaces in between will be the real attractor for the Googles, the Atlassians and the Kulgans. Curating these spaces will be the next challenge for precinct planners and city strategists who have long understood the place-making contributions of landscape and art.  The next generation of installations will be playful hybrids of virtual and physical worlds – not just for the tech sector, but for every human with a super computer in their pocket.  Urban gaming will be serious play.

Play offers the freedom to invent, to improvise and experiment. To do things that would look like failure in other contexts.  Over the past five years a whole new ecology of games has emerged with the saturation of the smart phone and GPS technologies.

“Gaming is play across media, time, social spaces, and networks of meaning. It requires players to be fluent in a series of connected literacies that are multi-modal, performative, productive, and participatory in nature.” pvi collective

Serious urban games now exist for training for change, for health and for social cohesion.  They range from covert individual experiences through to gleeful group quests. Here are four examples of the rapidly growing field.

Soulfill is a mobile assisted role-playing game for public transport. It wants you to focus on the people in the environment around you, not on the screen in your hand. The game prompts are minimal. You listen to a narrator who challenges you to move past the awkwardness of initiating eye contact. You score points by initiating and maintaining eye contact with strangers – and you lose points by making eye contact with those already looking at you.

Multi-player games are more carefully programmed in time and space – and this orchestration accounts for the influence of performance arts groups in urban gaming.

Perth-based pvi collective’s game known as Deviator recently took over the inner Sydney suburb of Darlinghurst.   Deviator is an immersive, outdoor game played in teams with smart phones.  Audience members are charged with the mission of temporarily transforming their city into a playground by engaging with a number of not-so-serious challenges.

I’m still not sure how pole dancing in Oxford Street qualified, but the gleeful fun of sack races on cross walks, “kiss chasey” in Taylor Square, and blowing up balloons until they burst resonated – most of them were straight out of the school yard. Other locations asked for more subversive play – (follow someone without their knowledge until they turn into a doorway) – or regenerative (here are some seeds you might want to plant) or declarative (what message would you like to leave on this blackboard). But the need to rack up as many points inside an hour made for an hilarious frenzied night of fun. Watch here.

The group behind deviator has another project in development titled black market. Part game, part social experiment, black market takes place on city streets and locates the players inside a world of economic collapse. Inspired by the core philosophies of the occupy movement and the financial bankruptcies in Europe, players need to survive in a world where money and material wealth have collapsed. Bartering and bargaining come to the fore.

Massively Multiplayer Soba is a large scale collaborative urban game focused on culture, food and language that culminates in a meal.  Points are awarded on the basis of complexity and the depth of interactions, rather than a scavenger hunt. The game is designed to encourage people to mix and interact with residents in meaningful ways that challenge preconceptions of race and language.

Where to next? The next generation of urban gaming might see more pervasive games that leave traces of activity in spaces for future visitors.  Or games that create more open-ended stories.  Even games that connect people more intensely over time.  The one thing we can be sure about is that the growth will be extraordinary, and with the mobile phone at the centre.

“The phone takes the processing power of yesterday’s supercomputers –even the most basic model has access to more number-crunching capacity than NASA had when it put men on the moon in 1969 – and applies it to ordinary human interactions.”

Ordinary human interactions are the stuff of our cities. Watch out for the rise of serious play.

Sue Wittenoom is a director of AECOM’s Strategy Plus practice in Australia. She’s presenting at Green Cities 2015 in Melbourne on March 18. Follow her on twitter @swittenoom

https://www.ingress.com a mobile, geolocation-based game that calls on players to travel to real-world locations such as landmarks and public art, where they use their phones to open and close portals that can help or hinder an invading alien race

http://www.watershed.co.uk/playablecity/conference14/ A Playable City is a city where people, hospitality and openness are key, enabling its residents and visitors to reconfigure and rewrite its services, places and stories.

The Playful and the Serious: An approximation to Huizinga’s Homo Ludens. Hector Rodrigeuz the international journal of computer game research volume 6 issue 1 December 2006

Serious Urban Games. From play in the city to play for the city Gabriele Ferri and Patrick Coppock, February 2012

The future of Employment: How Susceptible Are Jobs to Computerisation? Carl Frey and Michael Osborne, 2013

Unlocking the passion of the Explorer. Report 1 of the 2013 Shift Index series. Deloitte Center for the Edge

The Working Commons Everyone Needs

Light at the end of the tunnel

This website uses cookies to improve your experience while you navigate through the website. Out of these, the cookies that are categorized as necessary are stored on your browser as they are essential for the working of basic functionalities of the website. We also use third-party cookies that help us analyze and understand how you use this website. These cookies will be stored in your browser only with your consent. You also have the option to opt-out of these cookies. But opting out of some of these cookies may affect your browsing experience.
Necessary Always Enabled
Necessary cookies are absolutely essential for the website to function properly. These cookies ensure basic functionalities and security features of the website, anonymously.
Functional
Functional cookies help to perform certain functionalities like sharing the content of the website on social media platforms, collect feedbacks, and other third-party features.
Performance
Performance cookies are used to understand and analyze the key performance indexes of the website which helps in delivering a better user experience for the visitors.
Analytics
Analytical cookies are used to understand how visitors interact with the website. These cookies help provide information on metrics the number of visitors, bounce rate, traffic source, etc.
Advertisement
Advertisement cookies are used to provide visitors with relevant ads and marketing campaigns. These cookies track visitors across websites and collect information to provide customized ads.
Others
Other uncategorized cookies are those that are being analyzed and have not been classified into a category as yet.
SAVE & ACCEPT